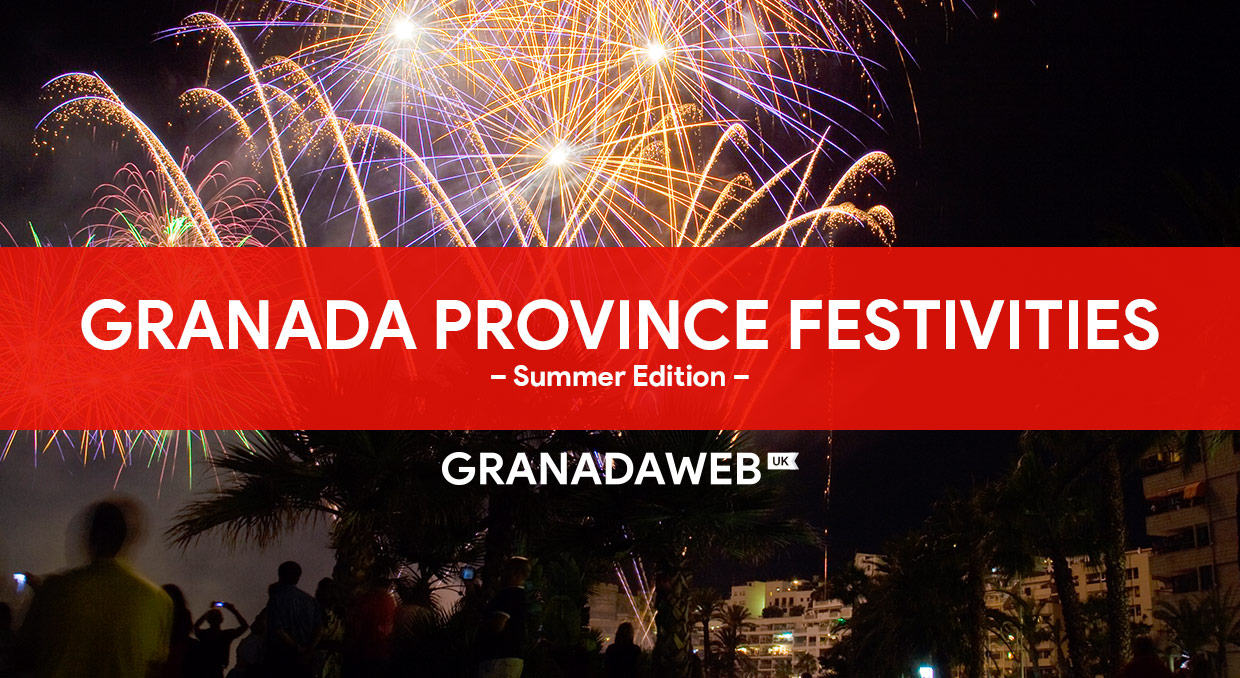 If there’s one thing I love, it’s the summer traditional Festivities and in villages of Granada province. Especially during the month of August, when they reach their maximum splendour. Verbenas, kings and queens of festivals, popular bands, tasting of local cuisine, craft markets, passion and devotion to saints, foam parties and an endless number of recreational and festive activities that flood all corners of Granada.

Popular summer festivals in the province of Granada

It is perhaps one of the most important tourist attractions of the municipalities of Granada: the popular festivals that take place during the summer season. I still have memories of my childhood in my father’s village: you were eager to go there to meet the “summer friends of the big cities”. They were the ones who set the trend in the surrounding towns and villages. The ones left in the “town square” without a mobile phone, the rockets and wheelbarrows, the street party and the song of “Paquito El Chocolatero”, ains… what nice memories! How we love a party! 😀

At the end of July, you can attend the Gastronomic Days of Güejar Sierra’s Cherry. And on the 23rd and 24th (you could change the dates) the Cattle Fair is celebrated in Molvízar.

Patron saint’s fiestas during the month of July 2020

The following towns celebrate their popular and/or patron saint festivals during the month of July:

Fairs and festivals in villages during August 2020

If you want to know more about the Prehistoric Festivals that take place in Piñar, you can click on the following link. They take place on the first weekend of August 2020.

Festival of the parva 2020 in Pórtugos

On the first weekend of August 2020, a celebration takes place in Pórtugos where locals and tourists can attend the grain threshing ceremony recreated in the old-fashioned way.

On August 5, 2020, a nocturnal pilgrimage takes place in Monachil that goes from Pradollano to the Tajos de la Virgen, crossing Borreguiles until it reaches the foot of the Veleta. It is known for being the highest pilgrimage in the world where the pilgrims carry a small image of their Virgin on their shoulders.

In Trevélez, also celebrated between the 4th and 5th of August 2020, they usually spend the night in Siete Lagunas and the next day they start their journey at dawn to see the sunrise from the top of Sierra Nevada.

The Bull Run for the feast of San Cayetano in Gor takes place from 8 to 10 August in the municipality of Gor. In addition, the procession of the Flag of San Cayetano stands out. A festivity that also serves as a meeting point for the Goreños/as who emigrated years ago and visit their hometown.

Fair of the Spell 2020 in Soportújar

In the second week of August 2020 it takes place in Soportújar (San Roque Festivities). You will be able to experience through recreations the rituals that the witches performed in this village as well as another series of acts and celebrations of today.

The 2020 Tourist Festival in Gualchos

Held in the second half of August, it pays tribute to the first tourists who decided to spend their holidays there in the 1960s. The tourist of the year receives a wreath.

Through this celebration that takes place on August 15, the Alpujarra de la Sierra (Mecina Bombarón) remembers the work that used to be done for the cultivation of the cereal; also known as “la trilla”.

The celebration of the Festivities in honour of Saint Louis, King of France, takes place between the 24th and 26th of August. The most important part of the celebration is the representation of Moors and Christians in the town square in the presence of the image of San Luis. In addition, you can also enjoy processions and cavalries.

On the last Saturday of August 2020, the municipality becomes a stage where the battle of the Carbonero mayor with the French armies is recreated; a brawl took place between the town and the French troops in 1810 where the mayor decided to jump off a cliff rather than surrender. A historical fact spread by the Accitan writer Pedro Antonio de Alarcón.

Festivals in villages in September 2020

The Cascamorras festival, which takes place from 6 to 9 September 2020, has been declared of national and international tourist interest.

The centrepiece of this celebration dates back to the 15th century when both towns symbolically disputed ownership of the property for the carving of the Virgen de la Piedad.

It consists of the fact that every year, a resident of Guadix, called Cascamorras, moves to Baza on the first day to take the image of the Virgin.

The custom dictates that it will be his if he manages to arrive without a stain before the Piedad.

Obviously, the attempt is in vain because every year thousands of locals, visitors and tourists crowd into the entrance of the town to receive it and leave it completely dyed.

On the last day, as he does not achieve his objective, he returns to the town of Guadix where the locals receive him anyway for not having achieved his goal.

Musketeers of the Santísimo 2020 in Lecrín – Béznar

The festivities in honour of San Antonio Abad take place between 8 and 9 September 2020. It is a popular custom that comes from the year 1566. According to the legend, Don Juan de Austria intervened to recover the Viatico stolen during the Moorish uprising.

Festivals held in the second week of September 2020 in Jerez del Marquesado in honor of Our Lady of Purification, the patron saint of the village and known as La Tizna. Here – for those who enjoy it – there are running and bullfighting events in the style of San Fermín.

Summer “tapa” days in the villages of Granada

If you love tapas and the local cuisine, take the car and take a stroll through the following villages during the summer months: