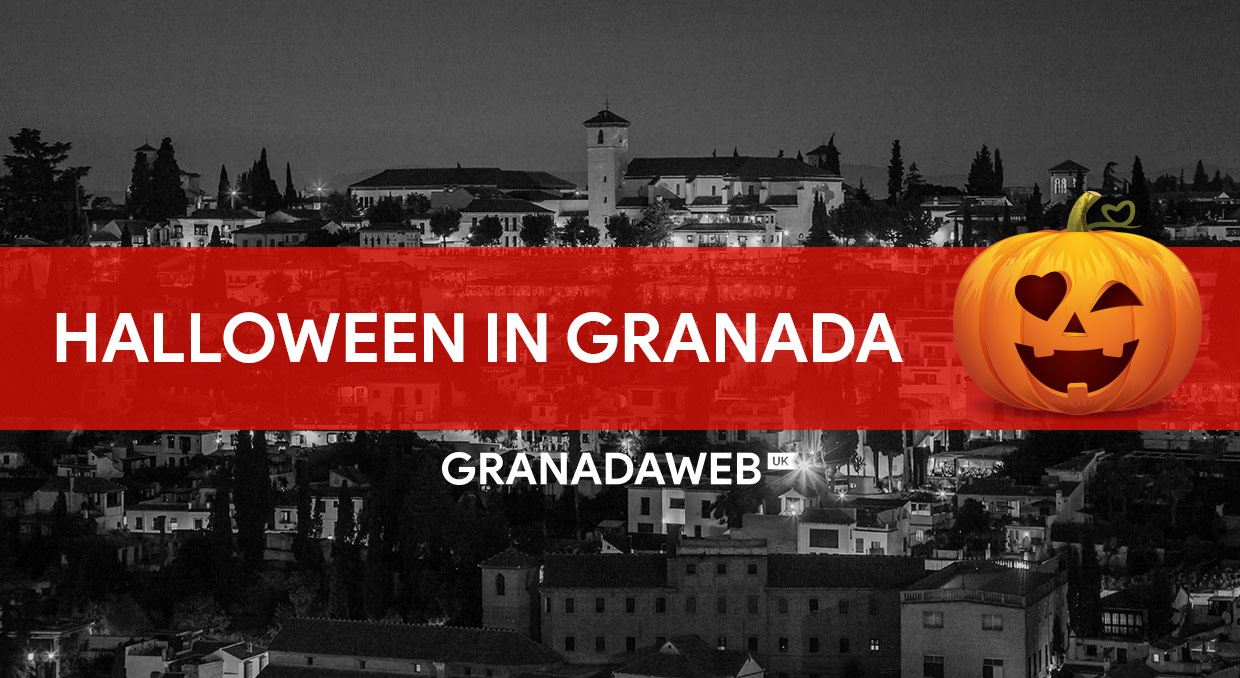 If you are thinking about what to do during Halloween in Granada (All Saints’ Day), here we are going to give you a few ideas for both going out in Halloween costume on the streets of Granada.

History of All Saints Day and Halloween in Spain

All Saints’ Day is also celebrated in Granada, as it is a national holiday. It takes place every day on the 1st of November and is celebrated by all the Catholic churches of the Latin rite. It is quite an emotional day as families flock to the Granada Cemetery to make floral offerings to their loved ones.

However, the Catholic rite is also intermingled with the celebration of Halloween. Known to take place on the eve of All Saints’ Day or also as “witches’ night”. This rite of Celtic roots “Made in USA” serves without a doubt to carry out the “typical” activities of Halloween: like sleeping or visiting enchanted houses, taking guided tours linked to the most sinister history of Granada, reading scary stories in groups or the famous trick-or-treating. Ah! And of course, going out in Granada disguised as the most popular monsters of literature and television.

if it falls on Thursday, Friday, Monday or Tuesday and you plan to visit Granada on these dates, you better plan well in advance. Then it becomes the well-known “Puente de Noviembre” – November long weekend –. Hotel occupancy is quite high. So first of all, if you want to take a look at our recommendations for sleeping in Granada at the best price without sacrificing quality, this is the best start.

What to do during Halloween in Granada?

To say only Granada capital is an understatement. In fact, if you have the opportunity to fall on a long weekend and take a few days off during All Saints’ Day, it’s a more than perfect occasion for any kind of getaway. In the end, more than tradition, what matters are the days of rest.

There will never be a lack of this type of event. Theme nights in pubs and discos in Granada. Generally it will work as a bargaining chip: You come in disguise and you will surely get a discount on your drink or a gift. A classic win-win where the objective is to have fun during the Halloween night.

Although it is quite complicated to find all the celebrations in places with a lot of atmosphere in Granada, it is easier to take a walk in front of them. They will always announce at least one week in advance their terrifying party fed by bloody shots and illuminated with creepy pumpkins (:

Dressing up and partying with friends

Doesn’t any particular party “fit” you or have you arrived in town at the last minute? Don’t worry about it. On October 31st anything goes. So organize a meeting with your colleagues, buy a costume for Halloween in Granada or order one online. It’s that simple and no less fun.

Guided and dramatized tours with scary legends of Granada

It turns out that in Granada there is a lot of written and built history. Although there are also quite dark and chilling facts. Some are ghost legends. Others are real as life itself. So much so, that you may have read about them in the newspaper or even seen them on television; because they have been the subject of study, for example, in Iker Jiménez’s television programme: Cuarto Milenio.

Now come the plans. Several companies in the tourism sector offer guided tours that are not, so to speak, normal. Rather, they are paranormal. They will take you back in time through the streets and neighbourhoods of the city… and they will reveal to you mournful crimes, anecdotes and legends of strange cases that have taken place in Granada.

Leisure and adventure in the long weekend of November

And here’s another batch of escapes, because it’s not all witches and demons that are at work this time of year at the end of October. What better plan than to have the opportunity to escape from the trip for a few days? Here we offer you three ideal adventures as an alternative to the party:

Looking for the “off the grid” break? Take your partner and family by surprise or organise a rustic weekend stay in the middle of nature with your friends. Many towns in the region have as much charm as the city itself. For example, only La Alpujarra in Granada is home to towns that are truly wonderful. That’s why we recommend that you take a look at our guide to the most beautiful villages in Granada. Not all of them are here, but we are sure that we will discover some secret for you that will make you visit them.

November’s Long weekend in the neighbouring capital of Malaga

A little over an hour by car or an hour and a half by bus, you have the city of Malaga. Loaded with culture and leisure to offer you a thousand alternatives for your disconnection: Museums and exhibitions, concert halls, nature, beaches and an endless number of possibilities that will make your escape an unforgettable weekend.

Flight escapade plus hotel in Spain and the rest of Europe

They say that “time is the one thing we can never get back”. However, if we combine this with “travelling is the only thing you buy that makes you richer” and “voila”: we have a 3-day weekend to get to know the rest of Spain and other European countries. So grab your backpack – or suitcase on wheels – and treat yourself to a national or international getaway. Unfortunately, from Granada to the rest of Spain airport connections are quite limited, but as we said in the previous point, Malaga is just a stone’s throw away. Check out the flight + accommodation packages at Atrápalo. You’ll fall in love with them and it’s not just the prices.